Staring at rows of bottles with names like “Chardonnay All the Way” and “Rocky Mountain Red,” Kat realized she had no idea what type of wine she even liked. For years, she had gone to this liquor store only for Pinot Noir, because that was the wine her husband liked.

Not husband. Ex. Ex-husband, she mentally corrected herself.

It was still strange to think of David as belonging to someone else now. They had been together for decades, and had grown as close as two people can be who share none of their inner thoughts with each other. Does David mix his laundry with Marielle now, or do they keep it separate, as he and Kat always had after an early incident involving the first cashmere sweater she had ever owned? Do they spend every Sunday cleaning the bathrooms? Does he still make those sounds when he brushes his teeth?

Not that it mattered, really. He had always been a perfectly okay husband, which is why it had taken his affair with a tennis partner for her to realize their relationship had been going on ten years past its expiry date.

Now that he was gone, there was an emptiness, sure, but not the black hole of despair she had feared. More like just a space where something once was. She knew better than to think it would remain empty. Spaces had a way of filling up, but with what? Or who? Kat had no idea. The world, and apparently — bringing herself back to her surroundings — its accompanying racks of wine bottles, was her oyster.

Speaking of oyster — Kat picked a bottle reading “Oyster Bay” off the shelf and inspected the label.

“A popular choice, but a bit acidic, if you ask me.”

She recognized the sales clerk from her frequent visits. With his shaggy hair and relaxed demeanour, to her he had always looked more like he belonged in a rock band than behind the counter of a liquor store. In her rushed trips in and out in the past she had never quite dared to strike up a conversation.

But now here he was. “I much prefer this Sauvignon Blanc,” he said, reaching for a bottle festooned with cartoon people having some kind of a raucous party.

“Maybe I like acidity,” she smiled at him, “and I didn’t ask you-” she looked at his name tag, “Cooper.” She could hardly believe herself. Flirting? With the cute liquor store clerk? And — could it be — was he grinning back at her?

“You were staring at that rack for fifteen minutes, at that point my wine advice is actually considered a public service and I can bill your medical plan for it.”

He’s funny too, she thought, and suddenly she was drowning in a wave of nerves.

She could feel the heat rising, her face reddening. Sweat started to form on her scalp. She was supposed to say something in return here. But what? Half-formed sentences came and went in her mind. She swiped at her forehead with her arm.

The silence had gone on for too long.

“I-I’ll just go with this one, if you don’t mind.” She said. It came off more brusque than she had intended.

His smile faded. Did she see a flash of something else? Then only a mask of professionalism.

“Of course.” He led her to the checkout.

On the drive home, she replayed the incident again and again in her mind. She had never frozen up like that before. What was happening to her? Maybe it was the divorce. Anyway, she told herself, guys like that had always been out of her league, even when she was his age. She vowed never to step foot in that liquor store again. Case closed.

At home, she sipped her wine. It was too acidic.

Two episodes of The Office, a restless night’s sleep, and three miles on the treadmill later, Kat had managed to put the events of the night before out of her mind. Mostly.

At the office, her boss Anika stopped her at the door. Anika was 29 and acted like she owned the company, because she did. How Anika had ever decided to hire Kat, who even five years ago was practically a dinosaur in the Marketing world, and stick with her all these years was still a mystery to Kat, but she loved her for it. “Come and meet our new hire, he’s going to be on your team.”

Kat froze in the doorway.

In skinny pants and a crisp button-up, his rough edges were sharpened and she realized he was much more of a hipster intellectual-type than lead singer. Yes. As he smiled at her in recognition, she noticed his eyes were a deep brown.

Vergo invites you to submit fictional short stories, or a limited chapter series, for our new feature called The Menopause Adventures.  Your heroine must be over 40 and we ask that you include some portrayal of a menopause symptom or symptoms in your story.

If your story is selected we will publish your name and short bio, along with bestowing a modest gift
– the coveted Vergo pen.

Submit your writing to: deborah@vergowoman.com

Ramona Grenier is an award-winning writer of short stories and television. Ramona's past occupations as Fry Cook, Television Producer, and Private Investigator have imbued her work with insights from all walks of life. She has a BFA in Film Writing from the University of Southern California and can be reached at monagrenier@gmail.com. 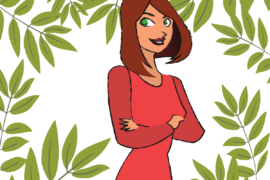